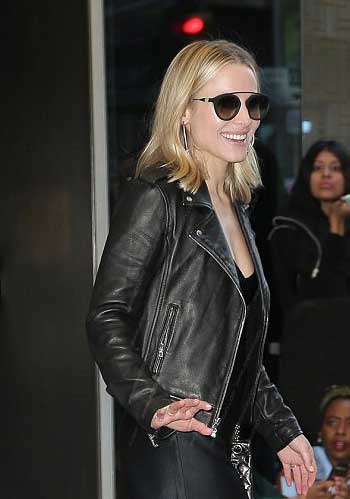 Kristen Bell Leather Jacket
Based on 0 reviews. - Write a review

Kristen Bell Leather Jacket is worn by Kristen Bell. Kristen Bell is a wonderful American actress. She starts her acting career by starring in stage productions. She was awarded Satum Award for Best Television Actress on Television. She has appeared in many comedy films. She has also starred in the main role Eleanor shell stop on the comedy series The Good Place.

Kristen Bell Jacket is beautifully designed by our professional tailors. It has lapel style collar and straps on both shoulders. The Leather Jacket has two vertical zippered pockets on the waist. It also has the front zipper closure for a stunning look. It made from high-quality lambskin leather and soft viscose lining to keep yourself comfortable. It is also nice while riding a bike, so grab it.