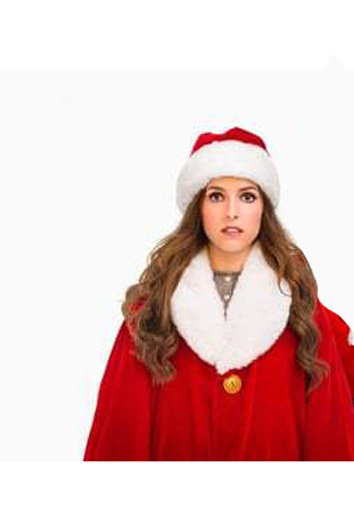 Anna Kendrick Noelle Claus Christmas Costume is another inspirational outfit from the movie Noelle and worn by the talented actress Anna Kendrick. She is an American actress and singer. Anna Kendrick began his acting career as a child actress in theater productions. The first starring role of her was in the 1998 Broadway musical High Society. Anna received several awards and nominations. Noelle is a Hollywood fantasy adventure Christmas comedy movie. Anna Kendrick portrays the role of Noelle Kringle the daughter of Santa Claus in this movie. Noelle produced by Disney Walt Pictures. It was released on 12 November. 2019 by Disney+.

Anna Kendrick Noelle Costume is crafted from wool blend material in a beautiful red color. Inner has a viscose lining to keep you warm during the whole winter season. It has fur detailing on the collar in snow-white color. There is a button closure on the frontage. Its red and white color combination is best for the Christmas season. This Claus Christmas Costume has full sleeves with fur lining cuffs. Place your order now at americasuits.com to dress up this Christmas season like Anna Kendrick.